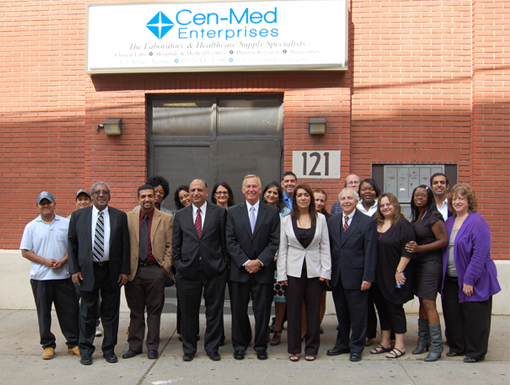 Cen-Med Enterprises, Inc. was founded by Shakila Chaudhry in February of 1992 as a laboratory supply company for local laboratories. Shakila came from a background of overcoming obstacles and became the first woman in her village and neighboring villages to obtain an education at a time when female education was discouraged in Pakistan. She was resolute in becoming the first female to go to high school, and then college to earn her education. With the support of her grandfather, she accomplished what she set out to do, and learned the value of hard work and breaking the mold. The idea of struggling for her own success became a cornerstone of her future endeavors.

Eventually Shakila moved to the United States with her husband, Khalid Chaudhry, a veterinarian. While he practiced medicine, she set her sights on starting a business and making a difference in healthcare and analytical laboratory environments. When one of their friends suggested she use her expertise and determination to supply their small laboratory with products, she agreed and Cen-Med Enterprises, Inc. was born.

Cen-Med began by distributing products from other manufacturers. In 1996, the company expanded operations to include manufacturing diagnostic medical packs and kits for hospitals in the NYC area. In 1998, Cen-Med introduced a line of microscope slides, which took off immediately. With that product, Cen-Med officially became a contract manufacturer as well as a distributor.

Since then, Cen-Med continues to keep a long-standing commitment to innovation within the healthcare and laboratory community. Our customers can expect us to continue our legacy of quality, as demonstrated by our new products.